It's been quite a while since my last post...I've been under the weather so to speak and haven't been at my computer for any amount of time since last March. I also haven't done much research at all in that time because I would need a good block of time to sit and I couldn't do that.

Today I got to thinking about my grandma Porteous who has been gone since the early 1960s. She was probably the best baker I knew. Her pies never failed. I don't remember her baking cakes – my mom did that. The one thing she baked which was always fun for me were her molasses cookies. Around this time of year she would gather all the ingredients and implements to get ready to make the dough. I was usually the first at the kitchen table to watch and "help" as much as she would let me. I was maybe five or six years old.

She would get out a huge crockery bowl, a big wooden spoon, her wooden breadboard and all the measuring cups and spoons.
We were ready. My job was to get the flour and sugar out of a big bin in the pantry. That didn't go well with my mom because there was a trail of flour and sugar leading to the kitchen. All the other ingredients were measured and put in the bowl along with the flour and sugar.
Mix all ingredients. Chill for a couple hours or overnight. Grandma would cover the big bowl with wax paper and a large "four sack" dish cloth. She'd set it on our pantry's window sill to chill. I liked to sneak in the pantry to taste the mixture. Grandma never caught me with my finger in the bowl, but when she uncovered it, she suspected a little finger or two had been in it. She would exclaim "Oh, was that little mouse in here again?" I would giggle.

Roll out the dough on a floured board and cut into desired shapes. Grandma always used the gingerbread man cutters and let me put the eyes, nose and mouth on the man using the extra raisins.

Bake 375º F for 15 minutes or until done. Let cool on a rack. Cookies taste best the next day. The number of cookies depends on size of cutters.
I'm not sure if grandma followed the recipe to a "T", but it is close. Laying the cookies on a cookie sheet we would pop them in the oven of our old gas stove that was gas on the right side and wood-burning on the left. Grandma would open the oven door and stick her hand in to judge the temperature. If she felt it was hot enough, the sheet of cookies went in.
Oh that wonderful smell of molasses cookies in the oven. We couldn't wait for them to be cool enough to eat and when they were, we sure got our fill of them right away. I liked the crunchy ones the most.
I don't really make Christmas cookies anymore, but finding this recipe has given me the bug. I'll give it a go and hope they turn out as good as grandma's.

I'm My Own 7th Cousin Once Removed...Go Figure!

The other day, I was looking over my research on Grandma Porteous' maternal family the SCHMIDs and WERNERs. I thought I would try to fill in and clean up some information I gathered at the Family History Library in Salt Lake City. It is always good to go back and do a little clean up cause you never know what more you will find, but I wasn't prepared to find a quirky thing in her tree.

My grandma, Carrie Ida SNYDER of Fremont, Lake County, Illinois, was the daughter of Wilhelmina SCHMID. I was following her mother’s lineage when I discovered a curiosity. I have no idea how to explain it, but I’ll do my best not to confuse you and myself!

Since I do everything on an iMac, Reunion is my family tree program. I’ve used it since the early ’90s and I have had very little problems. I love it. Well, I started by checking on my sources to make sure I have them entered. All seems to be in order; I only missed a couple that I found in my SLC notes. So that was done and I thought I would display a family chart to make sure I hadn’t forgotten any boxes.

I called up the earliest ancestors, Christian BRACHER & Sophia (?) 5x gr grandparents and viewed their daughter Helena Margaretha (4x gr grandmother and 5x) and her husband Christoph Jacob WERNER; their children which included my 4x gr grandmother Justina Regina b. 1751. Never noticed until now, Helena had two boxes under Christian and Sophia BRACHER. To my surprise my 3x gr grandfather Johann Georg WERNER was also listed under a separate family card with same parents! What gives? This is nuts and a little baffling. 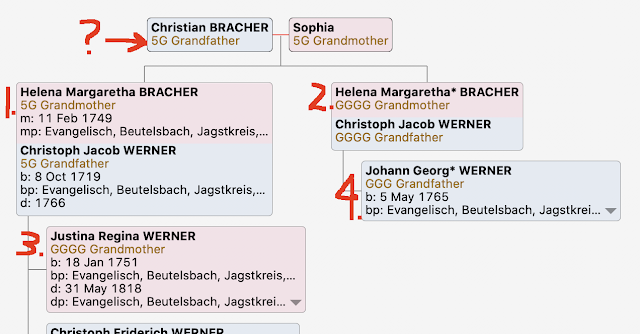 Concentrating on the WERNER family, I laid out a chart which shows my lineage. From Barbara WERNER on down, they all lived and married in Beutelsbach. Johann Georg was about 14 years younger than his sister Justina Regina and was married nine years later. 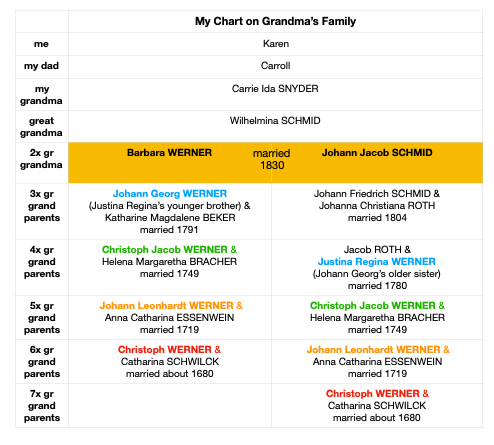 There is one marriage after Justina Regina’s. The marriage of Johann Friedrich and Johanna Christiana (Justina's daughter) kind of ruins the x gr grandparents making Christoph and Catharina both my 6x and 7x gr grandparents therefore making me my own 7th cousin once removed! 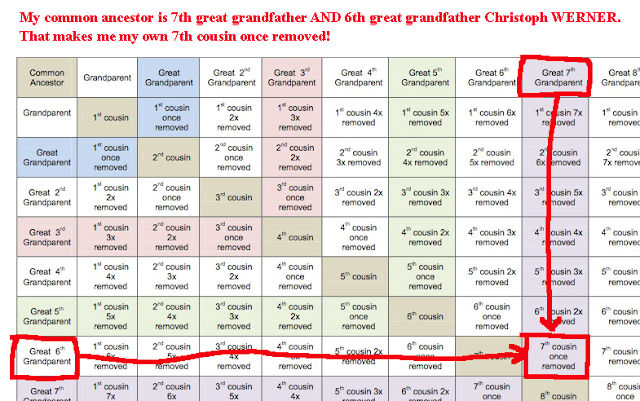 Posted by Karen Porteous Glass at 12:31 PM No comments:

A Memory: My Tooth by Hook!

During the 1950s, I grew up next door to my grade school in Mundelein, Illinois. Lincoln Elementary School was the first public school to open in the area in 1894. Originally, it contained only two classrooms. Over the years the building had a few additions, but the original stone-front building is still there. A little background, but that isn’t what my story is about.
Late 1890s - my white house in middle and school to the right.

There was a wonderful old janitor who seemed to love us kids. He seemed to always have a good day and was always joking around with us. We never saw him angry…well, maybe a few times. I think his name was Mr. Dietz, but it has been so long ago, I might not have that right. Anyway, he was a large man who had a hook hand and often we would ask him if he had a wooden leg because we had all been told about Treasure Island’s Captain Flint. He never exposed either leg, so we never knew for sure. I thought he lived in the basement under the old school. As a little girl with a wild imagination, I figured it was the only place he could have lived. I never saw him come to school in the morning or go home at night. There was only one conclusion…he lived in the basement of the school in the dungeon!

Well, in the dungeon of the original two-room school was the janitor’s office. That part of the basement was dark, damp, and dingy. The walls were made from big old gray stones and mortar which were covered with coal dust from years of using an old coal furnace. There was a dimly lit, narrow stairway leading from the side of the school’s front door. It led down to what I thought could only be the “dungeon.” That stairway was a shortcut to the lunch room. We had to pass through the dungeon, past Captain Flint, to get our lunch. Usually at lunchtime Mr. Dietz would be having his lunch at his desk; in back of him was a darker area used to store coal. When I took the shortcut to the lunchroom, I would hurry pass the old man behind the desk, he would look up, reach out over the front of his desk and snap his hook all the while having a devious smile…just to give me a fright. I would squeal and dash as fast as I could to the door leading to the safety of the brightly lit lunchroom. I could hear him chuckling.

What first grader didn’t fiddle with a loose tooth? One school day I fiddled with mine. I don’t know about you all, but I do know that nowadays this wouldn’t ever be tolerated…. that could be distracting to the class and especially the teacher. It was that day. Did she send me home with my troubles — and hers? No. She sent me down to Captain Flint – to extract the tooth! Did he use a pliers like my dad would have done? No. Did he tie one end of a string to the tooth and the other to a door knob? No! He came over to me and said, “Open up and show me your loose tooth.” Shaking, I tilted my head back and opened wide. Before I knew it, he stuck his HOOK into my mouth and yanked the tooth out!


Old Lincoln School as we know it today. No tower.
The original school: front three side windows.